So who is your role model?

Your mother? Your sister? Your Grandmother? Or is it more likely to be Taylor Swift or Marilyn Monroe?

Whoever your role model is in this crazy world, or the person you are looking to emulate, you need to bear two things in mind.

Now before you go and give up on the idea of role models, or of celebrities having positive traits you want to emulate or having experiences that you can relate to or personalities that make you giggle, it’s not all bad news.

First, by accepting that these individuals are not perfect allows you to actually be kinder to yourself. Note to the wise, Marilyn Monroe had fat days, Keira Knightly gets acne and Taylor Swift has days when she feels like a failure. So instead of berating yourself for not stepping up your routine at the gym and therefore failing to become the spitting image of Cameron Diaz, it allows you to see your role models as having the same imperfections as you rather than as women whose standard of beauty and accomplishments you will never able to surpass.

Second, treating someone as an idol is just as dangerous to them as it is to you. It not only grounds our own self-esteem into the pavement and gives us one more reason to beat ourselves up, but it is unfair to hold anyone to such high standards because when they make a mistake and trust me, they will, this illusion of perfection is shattered. Instead of just being seen as human, they become pariahs. We also need stop throwing around words like “perfect,” “perfection,” and “flawless” and to quit gushing all over celebrities’ Facebook, Instagram and Twitter accounts because not only does it makes me want to heave but it’s a complete falsehood. In Alexis Jones’ words “perfection is not real.” Yes, I’m sure (insert your role models name here) is attractive and is probably pretty talented, otherwise they wouldn’t be so successful in their chosen profession, but they are not perfect and they probably find it incredibly awkward and uncomfortable when people tell them that on a continuous basis.

And finally, by realizing that your chosen role never agreed to or wanted this title actually gives them more freedom to be authentic and relatable, which is what we all want at the end of the day. This means producing art and giving opinions that are real and honest, and not something that resembles a PSA. Treating them as perfect Barbie and Ken dolls prevents them from being honest and raw in their art or whatever it is they do, as they now have this immense pressure to tow the line and not appear anything less than perfect, which essentially degrades their work and makes them less interesting and relatable as people. 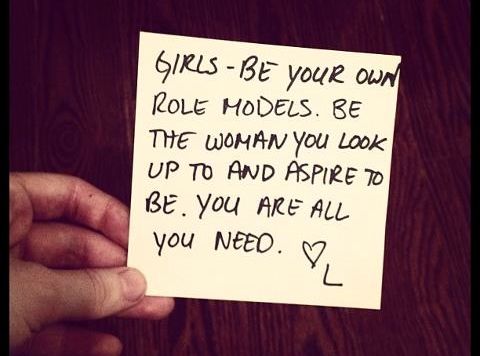 Celebrities are not devoid of social responsibility to their fans or to their environment. Everyone has some form of responsibility for the world around them. Take the example of Rihanna and Chris Brown. He violently assaulted her and left her badly injured. Prior to the court case Rihanna made a decision to try and reconcile with him. However, after seeing the message that this could send to her fans she decided to end things with him. Now this is what I call a socially responsible action. Obviously, we have seen since then that both have engaged in a relationship together as well as collaborating on a song. In response to this Rihanna has publicly spoken out and defended some of her actions saying that she does not want to be considered anyone’s role model. On the flipside of this, is Taylor Swift’s very astute observation that, “the truth of it is that every singer out there with songs on the radio is raising the next generation, so make your words count.”

So where does the balance lie?

Honestly, I don’t know. On the one hand celebrities shouldn’t have to compromise their personality, their opinions or their life choices for the sake of being our role models, but on the other hand there has to be an awareness of the huge influence they hold and the repercussions that come with that.

I do think though, that we as individuals need to be more wary of who we choose to be our role models because they are not always going to be as socially conscious as Taylor Swift. They may not actually care if you have a devotional shrine in your room to them and that your world may implode if you find out that they actually didn’t write that one song on their album or were mean to the cashier in Walmart. Cut them some slack! We all have bad days and celebrities aren’t any different nor do they exist in a flawless vacuum.

I also think we should be using our own common sense and intuition about what is right and wrong; or what we like and don’t like. We shouldn’t treat everything our role models say or do, or what products they endorse, or what shampoo they use, as gospel or as the only way live. We have to figure these things out for ourselves.