“What happens in college, stays in college” will be the first thing you hear when you sit down to watch The Hunting Ground, a documentary by Kirby Dick and Amy Ziering. A university president speaks the words at the opening ceremony for new students. The comments are clearly meant as a lighthearted observation on student life. However, after an hour and forty minutes, these words will have taken on a whole other meaning.

The Hunting Ground sounds like a title for one of Sam Raimi’s horror films. In fact it’s a horror story of a different kind: it documents the undiagnosed and mostly unseen epidemic of rape and sexual assault on some of America’s most renowned University and College campuses, along with the subsequent cover ups by administrators, professors, coaches, and campus police at those institutions. A culture of silence and victim blaming is as much of an epidemic as the initial crimes.

The documentary rakes through numerous students’ personal experiences of rape and sexual assault, pulling up and disentangling why, despite an obvious culture of rape and sexual assault by a group of repeat offenders, nothing has been done, or rather why everything has been done to protect the perpetrators and discourage the survivors of these crimes.

The phrase “follow the money” couldn’t be more appropriate than in this film. It is all there in green and black why it is not in a university or college’s interest to expel or press charges against the perpetrators of these crimes. Whether that is the financial relationship between the universities and the fraternities, who house 1 in every 8 students, or the multi-million dollar media contracts between universities and the sports industry that help create the culture of entitlement around college “football stars.” 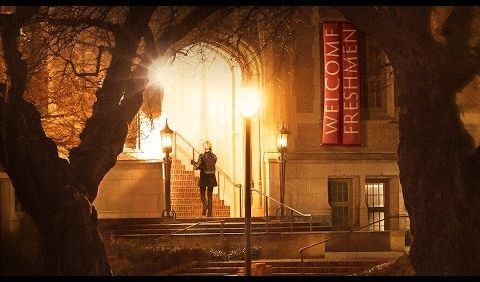 This documentary comes at a time when survivors of rape and sexual assault are beginning to take back power from the institutions that have left them out in the cold. Columbia art student Emma Sulkowicz has vowed to carry around her bedroom mattress to classes until her rapist is expelled. Annie Clark and Andrea Pino, two former students at the University of North Carolina and both rape survivors, decided to file a Title IX against their universities after their allegations were ignored. Title IX is effectively a gender equality law which states,

“No person in the United States shall, on the basis of sex, be excluded from participation in, be denied the benefits of, or be subjected to discrimination under any education program or activity receiving federal financial assistance.”

Annie and Andrea argued that due to their university not taking appropriate action and investigating their complaints, it was contributing to a hostile environment for students.

Since their filing of Title IX more than 90 Universities and Colleges are currently under federal investigation for their handling of sexual assault complaints.

So why bother going to see this film when universities and colleges are already being held accountable?

Because not enough is being done. Because Emma Sulkowicz is still carrying her mattress to classes. Because Annie Clark and Andrea Pino’s assailants have not been prosecuted. Because if nothing changes, more than 100,000 college students will be sexually assaulted in the upcoming school year; if nothing changes, universities and colleges will continue to ignore survivors and protect the perpetrators; if nothing changes there will be more Lizzy Seeberg’s, the Notre Dame College student who committed suicide when the College became more invested in protecting its reputation that protecting its students.

If nothing changes, universities and colleges will continue to remain a hunting ground.