‘Someday Soon’ is the new song to be released from Lindi Ortega’s upcoming album ‘Faded Gloryville’, due out August 7th on Last Gang Records. The album produced by Dave Cobb (Jason Isbell, Chris Stapleton, Anderson East); Colin Linden (who produced her 2012 Cigarettes & Truckstops); and the Muscle Shoals based team behind the Single Lock label, John Paul White and Ben Tanner. 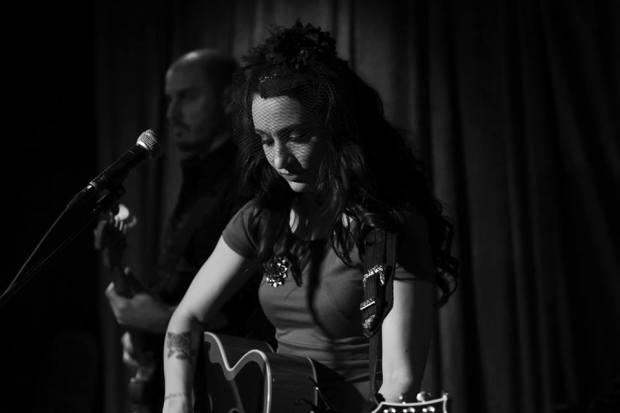 ‘Someday Soon’ comes from the Muscle Shoals batch of songs, which infuses traditional country with soul which is brought to the forefront by Ortega’s voice, alongside a gentle groove, building and layering for the duration of the track. The track, which was co-written with White and Ortega, also features White singing harmony vocals.

“It’s a song about intention and longing to make a change for the better but its’ kind of left ambiguous as to whether that change actually happens” says Lindi, “John and I tried to tap into that feeling of knowing a change must be made, and daydreaming about it, and the thought processes that happen before you leave someone who is no good for you… or you continue to stay.”

The weight and intensity of this longing is carried in Ortega’s soulful and wavering vocals, and by the two and half minute mark the tension that has been slowly building throughout suddenly gathers momentum and the decision to stay or leave could go either way.

The desperation and heartbreak in Ortega’s voice is real; her soul that she has been steadily revealing throughout the song has now been stripped bare for all to see and feel. With White’s vocals coming in at that crucial moment, blending his soulful baritone with Ortega’s haunting vocals, you truly feel the full weight of the song; both of them knocking it out of the park.

“Something’s gotta give/ How am I supposed to live/ Wishin I was anywhere instead of going nowhere with you/ And I’m saying, someday soon”

It’s very, very cool and a little ridiculous when the album you were an A&R intern on gets nominated for #bestfolkalbum at the @recordingacademy. Something to be proud of. #frontporch #grammys2020
Why Mandy Moore is the artist to watch in 2020: Actress, Musician, and an unlikely voice of the #MeToo Movement A look at Moore's new songs from her upcoming album 'Silver Landings' + her voice in the #MeToo movement. In the wake of the much needed #MeToo movement, emotional, physical and financial abuse has shown to be both rampant and embedded in the film and television industry. For whatever reason, the music industry seems to have escaped the tsunami of allegations and legal action that these industries have experienced. Not because abuse isn’t there, but because the industry is better at hiding it – less powerful unions, lack of Human Resource departments at independent labels and ineffectual ones at major labels are perhaps a contributing factor. There have been seemingly “one-off” cases: Kesha and the rape allegations against her previous producer, Dr Luke; Taylor Swift’s sexual assault lawsuit against radio DJ David Mueller; as well as a Rolling Stone article by Marissa R Moss, in which sexual harassment at country radio stations was exposed as being rampant and perhaps most unsettling, ‘business as usual’ and a ‘rite of passage’ for new artists. Activists within the film industry have created the Time’s Up initiative, which is a fund that actors and those in the entertainment field have financially contributed to, to help fund women’s legal defense cases against sexual harassment and abuse. The music industry is yet to create its sister fund. And apart from Swift, there has been a lack of high-profile singers willing to go on the record about their own experiences of sexual harassment and abuse in the same way Angelina Jolie, Gwyneth Paltrow, Salma Hayek and Rose McGowan have done with regard to Harvey Weinstein. In amongst the voices of those artists who have come forward about sexual harassment and abuse in the music industry, has been actress and singer Mandy Moore. I say actress and singer in that order because despite Moore starting her career as a singer and not as an actress, Moore has for the last 10 years been largely absent from the music industry. (Link in bio) #MandyMoore #SilverLandings #AmandaLeigh #newmusic #artiststowatch