Timelessness is two fold. On the one hand it is something that stands the test of time. It is both relatable to the generation for which it was made and future generations after. Common values, feelings and experiences pass over time and never become out dated or far removed from those watching, reading or listening.

On the other, it is also about honesty and authenticity. No matter how universal a film’s values are, if they are not portrayed with honesty by the director and the actors, then it will not have a life of it’s own beyond the confines of time.

This is what distinguishes good art from bad. Good art will pass down to generations captivating and moving them, where as bad art has a sell by date and will disappear from the public consciousness as quickly as it came into being.

A timeless piece of music, a book or film are the ones that stay with you. It may not be at the forefront of your mind all the time and it may not be overt but it is still there nonetheless. It’s something you revisit even if it’s just in your imagination. Like a long lost relationship, a timeless piece of art shapes and informs you and your experiences and the way in which you view the world. In the words of William Faulkner, “the past is never dead. It’s not even in the past.” What you see, read, and hear, though written in the past, is never really in the past at all because it becomes a part of you, a part of your experience, and while you are still alive, it continues to lives on as well.

This year marks the 70th Anniversary of David Lean’s ‘Brief Encounter’, adapted from Noel Coward’s play, starring Celia Johnson as Laura Jesson and Trevor Howard as Alec Harvey, two seemingly happy married people who have a chance encounter and fall hopelessly in love; hopelessly because their love one that is doomed to end the moment it begins. The film was made in 1945 just as the Second World War was coming to a close and a new era was beginning to unfold. The film perfectly captures this moment in time; from the station cafe in which Laura and Alec meet, to the high street and cinema; to the fashion and the language; to the traditional family and societal structures, and the inward struggles against the values of the time.

With a film that is so heavily laden with contextual and historical layers you would expect that ‘Brief Encounter’ would be no longer relevant to today’s society and would be relegated to a historical film syllabus and only pulled out to analyse, never to enjoy. But no. ‘Brief Encounter’ continues to live on, much in the way Faulkner suggests. Because, whilst the film was made in 1945, and much of what it was, is now in the past, the very essence of the film is no more in the past than ill fated lover affairs are.

‘Brief Encounter’ is not only a perfect photograph of the 1940’s but also holds a photograph within it. It is Laura’s own memory or photograph of her time with Alec. This is no more evident as when she’s walking with Alec through the station on their final journey together.

“Those last few hours went by so quickly. As we walked through the station, I remembered thinking: ‘This is the last time with Alec. I shall see all this again but without Alec.’ I tried not to think of it, not to let it spoil our last moments together.” 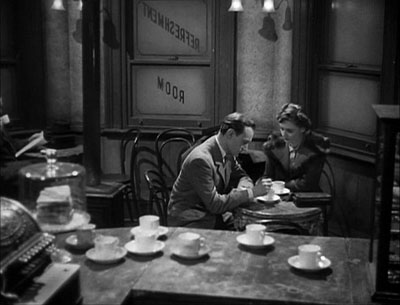 For me, this is the part of the story that really sticks to my ribcage. Because we all have those moments where a seemingly ordinary memory is given a different, and vibrant filter by the presence of another person. But when that person is no longer in our lives, that once mundane memory can never go back to the way it was before. It can never be ordinary again. It will always have the imprint of that person; a phantom in the photograph.

“This can’t last. This misery can’t last. I must remember that and try to control myself. Nothing lasts really. Neither happiness nor despair. Not even life lasts very long.”

All of these experiences are very much part of our lives and the act of having Laura narrate the story only adds to this sense of timelessness. Her’s is the only window in which the audience can connect to her and Alec’s relationship and its eventual end, and the emotional turmoil in which she finds herself. It is the personal and universal feelings that Laura conveys so succinctly, from the train journey home in the aftermath of the affair ending, having to listen to Dolly Messiter drone on and on, to the after dinner ritual of watching her husband finish the crossword. It’s all there; all those dark, depressive, unkind thoughts we all have but never utter aloud are out there in the open and it doesn’t even matter that none of the other characters can hear them.

“I had no thoughts at all, only an overwhelming desire not to feel anything ever again.”

These are “heartbeat moments”; moments of truth that no matter where you come from or what your background is, can relate to and connect with.

There is a freedom to be herself in those moments with Alec. There is also a longing on both their parts to be seen as someone more than who they are. The parts of your self that are taken for granted by family and friends and are just seen as mere quirks, suddenly become beautiful and interesting to another person. And like with Laura and Alec, that person sees you, not just a wife or husband, mother or father but as a whole person whom they can be their innermost self with.

This struggle and inner turmoil is brought to a crescendo in Laura’s exchange with Alec in the refreshment room when they realise their affair can no longer continue. Alec tries to reason that they have nothing to be ashamed of, as they know that they truly love one another and that is true and should be enough. But Laura sees their affair through the lens of society, and what is considered “right” and “decent” by that society and its values, thereby forfeiting her chance at love and happiness, and the freedom to be herself.

Alec: “We know we really love each other. That’s true. That’s all that matters.”

Laura: “It isn’t all that matters. Other thing’s matter too. Self-respect matters and decency. I can’t go on any longer.”

Alec: “I know about the strain of our different lives – our lives apart from each other. The feeling of guilt and doing wrong is too strong, isn’t it? Too great a price to pay for the happiness we have together.”

I think this is what makes ‘Brief Encounter’ so unaffected by the passing of time. The language and setting may be things of the past but the human element of the film, and the honesty and uniqueness with which it is portrayed by Johnson, Howard and Lean will always remain firmly in the present.