The new merger, shall we call it, between Department for International Development (DfID) and the Foreign and Commonwealth Office (FCO) was announced last week by the Prime Minister. The Cabinet had not been consulted so presumably this was a longstanding dream of Johnson and his chief adviser, Dominic Cummings.

DfID, then known as the Ministry of Overseas Development, was moved out of the FCO and made its’ own autonomous department in 1997 by then Prime Minster Tony Blair. The goal of the department is “to promote sustainable development and eliminate world poverty”.

The UK gives 0.7% of its GDP away in foreign aid. A tiny amount, which was set to be reduced by Covid-19. But when you see your council tax bill increasing and pot holes the size of craters outside your house or the price of rent, petrol, food, etc. increasing and your Prime Minister, MP says well, it’s because the previous government gave all your money away to foreign scroungers who aren’t helping protect you. No more! And away goes DfID into the Foreign Secretary’s Dominic Raab’s wallet. Failing to mention and address that the real and rather complicated reasons you can now grow daffodils in potholes and your wages only get you to the middle of each month, but no voter wants to hear the long answer, do they?

Johnson’s reasoning for the move was the ongoing myth that the right has perpetuated is that the UK is the world’s “cashpoint” for unscrupulous developing countries to use at their leisure with no rules, regulations of audits. The perspective that we should only give if we get something tangible in return is a problem in itself which I will return to it later.

In the Prime Minsters ‘own words, “For too long, frankly, UK overseas aid has been treated like a giant cashpoint in the sky, that arrives without any reference to UK interests.” Johnson is very good at making these metaphors, very good. They appeal, they’re simple and they tap into what the voters want to hear. The problem is they are all lies. The government, regardless of whether it is Labour or Conservative, will rarely do anything if it is not in the UK’s national interest. 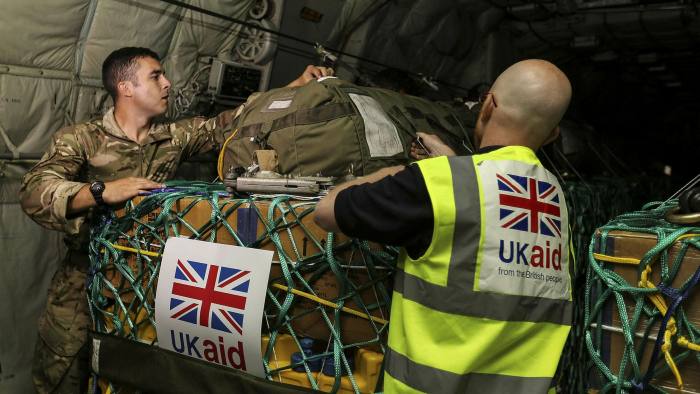 During the War on Terror, there was the strong argument that the government under Tony Blair securitized foreign aid through DfID. In other words, “…DfID’s policy post 9/11, where development and aid has been increasingly re – directed towards states strategically important in the War on Terror.” Ironically my undergraduate dissertation explored this co-opting of development. It acted on “the assumption that failed states breed terrorism is contested and far from simple, despite what Western governments depict. This has led to the spheres of security and development becoming entwined, where development policy is constructed to achieve security policies.” This assumption came in for a lot of criticism by both the traditionalists’ who argued that the concept of security was being stretched too far and becoming meaningless, and those within the development community who believed development aims were being subordinated in favor of states’ national security interests.

It would therefore suggest that the government can direct DfID’s policy and aid easily from afar without absorbing it into the FCO. This decision bears the hallmarks of the reasoning behind leaving the EU: that the UK government was being prevented from governing its own land, people and interests by Brussels and therefore had no choice but to “take back control” and leave. Like I said before, all lies but it slips nicely onto the tongue and allows Johnson to continue with his own self-destruction agenda.

The narrow parameters in which Johnson measures the country’s national interest, which from his statement regarding the Ukraine and Zambia, seems to be a step up and narrowing down further of Blair’s securitization of development from the early 2000s. In this case, unless another country can increase the UK’s security or give us something immediately beneficial in return for aid, then the UK government is not interested.

Oxfam GB’s chief executive, Danny Sriskandarajah, called that comparison a “brazen challenge to the aid sector”, pointing out that more than half of Zambians live on less than $1.90 a day, while extreme poverty in Ukraine is near zero.

Johnson’s blinkered approach fails to grasp that when countries and their citizens are lifted out of poverty and/or freed from diseases like Ebola or HIV/AIDS, then this not only benefits that country and their citizens directly, but it also benefits the UK and the world indirectly and in the long-term. Surely it makes sense to give aid to a developing country allowing it to build its own infrastructure and stable economy for the long-haul rather than giving out sporadic and short-term contributions.

This perspective that giving something for nothing is wrong is belief long held by right-wing and isolationist figures. Proponents of this idea, like Johnson and Cummings, believe that the national interest is static, one dimensional and bolstering the UK’s standing in the world.

Ironically, DfID does bolster the UK’s standing in the world but not in the way Johnson and Cummings want it to. It elevates the UK as a leading soft power in the world with an expertise in international aid and development that is both respected and persuasive. By doing away with DfID in its’ current form the UK and Johnson have inexplicably shot themselves in the remaining foot; the other foot being Brexit and the head being their response, if you can call it that, to Covid-19.

The decision to bring DfID back under FCO control has brought about criticism from three former Prime Minsters’ Gordon Brown, David Cameron as well as Tony Blair, the chief architect of DfID. David Cameron responded on Twitter that it was “a mistake” resulting in “less expertise, less voice for development at the top table and ultimately less respect for the UK overseas”; Brown said it was “sad” the government was “abolishing one of the UK’s “great international assets”. Tony Blair was more scathing,

“We set up the Department for International Development so that it would become a major and important arm of British soft power. Today, DfID is an internationally recognised body with real heavyweight power and clout. Anything the government wants to do with DfID, for example to make it more strategically aligned with Foreign Office objectives, it can perfectly easily do within the structure of an independent DfID, still part of the UK government. But getting rid of it, at this point in time, is a big mistake. We’re at a moment, post-Brexit where Britain needs every one of the assets it has. DfID is rightly regarded as probably the best development agency in the world right now. It’s a very foolish thing to abandon it, to undermine therefore our standing in the world, and to do something, which may be done for reasons of politics, but has nothing to do with the true national interest.”

No matter what the UK government or Johnson want you to believe, the UK is no longer an influential or competitive power on its’ own. With economic and foreign policy giants like China, India, and the United States, the UK’s soft power influence was crucial in maintaining a seat at the table and that seat was made secure by DfID. Now that is gone and by default our ability to no longer influence other countries’ development and foreign policy decisions, as well as the uncertainty surrounding Brexit talks with the EU, Britain’s seat at the table is look ever more precarious.