It’s been eight years since Lucie Silvas performed in the UK and nearly ten years since the release of her breakthrough album Breathe In but from the packed out and expectant crowd, to Lucie’s powerful yet vulnerable voice and her beautifully written songs, you would think no time had passed at all.

Lucie opened the set with ‘Unbreakable Us’, a happy love song about holding onto each other and keeping each other afloat no matter what the world throws at you, and knowing that nothing stays the same for long. The song seemed to take on a new meaning in that room; a room eight years ago Lucie probably thought would never exist for her again.

Next up was the rockier and “hot mess” of a song ‘Happy’ that you can’t help stomp your feet to and move your body. Lucie said that when she moved to Nashville, her friends kept coming to her for love and relationship advice to which quipped, “I wouldn’t come here!”, to laughs from the audience but said that, that was all over now since meeting her husband. Lucie then launched into ‘How To Lose It All’, complete with handclaps from the audience and her musicians. 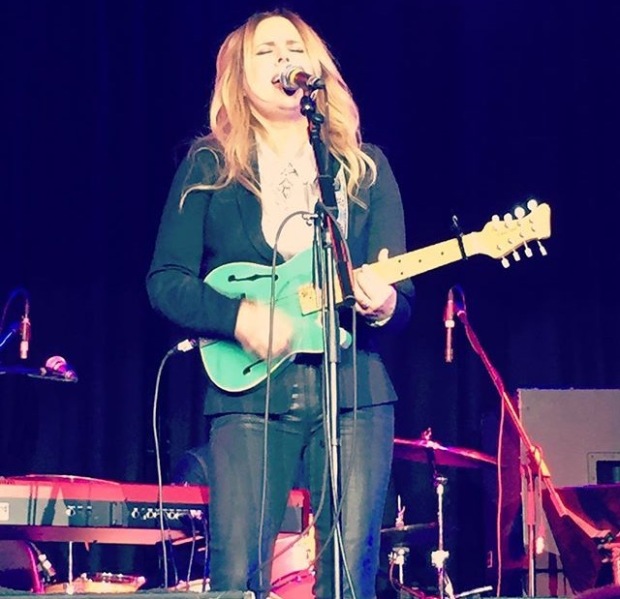 How many buildings can I burn down/ Picking through the ashes is all I know now/ It’s just like me to let a good thing go/ I’m a wrecking machine all on my own.”

Lucie sat down to the piano to play ‘Roots’, the most haunting track from the album. As she begun to gently play the opening notes, people around me began to look up with smiles on their faces, comforted that Lucie had included this song in the set. The story is a universal truth but one that rarely is acknowledged in a world where we are all pretending to have our shit together. ‘Roots’ tells the story of not wanting to move on; of wanting to stay in that oddly familiar yet painful place of hurt and heartbreak for fear of losing the person that has already left.

“There is fear in the thought of freedom/ There are ways out and I see them/ But I choose to be held captive/ As crazy as I know that is.”

Nearer the latter end of the set Lucie said how thankful and amazed that not only we had turned out but that we had sold out the show. She then began to say how getting to this place had been a long and hard journey and that the music we had all heard tonight had been completely self-funded by her, and her alone with no big label, which brought thunderous applause from the audience and a standing ovation.

Lucie then introduced the title track from her album Letters to Ghosts as “the song that brought me back to life.” The song is one of looking back on a past relationship and seeing what could have been, what might have been if the narrator had only tried harder, and the ghost of that relationship forever following behind her as she makes her way through. The song is even more powerful and moving in person, not only because of what it is but also because watching Lucie is like watching someone wring their heart and soul out, not for dramatic effect but because she has no other choice. That feeling reverberated around the room and no one was spared.

“Left with the ashes as I let it burn/ There with my cold heart buried in the dirt/ His love’s the only thing that still hurts/ I would be yours now if the tables turned.”

Never an artist to shy away from her past or the music that brought her to where she is today, Lucie played ‘What You’re Made Of’ which elicited cheers from the audience but what really made the room swell with energy was when she stepped out in the encore to perform ‘Breathe In’.

Lucie closed the set with the beautifully delicate ‘Pull The Stars Down’, where her vocals became raspy, soft and utterly vulnerable, perhaps mimicking the fragility of love and its ever changing nature. The song whether hearing it through speakers or live, always brings me comfort and hope no matter where my mood is.

“I swear it’s true/ I’d do the same for you/ Cos when we’re together the calmer the seas/ And this big ole’ world ain’t as big as it seems/ You pull the stars down/ I just have to reach out.”

How To Lose It All

What You’re Made Of

You Got It (Roy Orbison cover)

Pull The Stars Down