July has seen a quick succession of standalone EP’s released by women in Nashville; Caitlyn Smith, Molly Parden and Joy Williams. The story and words are the prime focus of these artists who refuse to stick to one “type” of music and who bend genres, and at times reimagine them, all in service of the story.

The first of them is Caitlyn Smith’s EP Starfire (July 8), which, because who has written for in the past and where she lives, could lazily be called country but the sound and lyrics are more akin to those artists who sing the blues. Detail is important to Smith; it glues her stories together. Think Taylor Swift’s All Too Well.

Next is Molly Parden’s With Me in the Summer EP (July 15), which unlike Smith, leaves the details vague and lets the instrumentation and atmosphere do the talking. Despite the differences, both draw you into their worlds and their stories, and allow you to find yourself and your experiences in the melodies. The EP is bookended by songs that could very well represent the hopeful beginnings of summer and the inevitable drawing in of nights as summer disappears in place of Autumn.

Last is Joy Williams’, formerly of The Civil Wars, Venus (Acoustic) (due out July 22), an epilogue of sorts to her 2016 EDM release Venus. Williams has gone back to where it all started; an acoustic guitar and her voice, which is free to roam on a seven track selection of songs both from the original album but also never heard before songs. The EP gives the listener a much more calming and peaceful but nevertheless a moving listening experience; one that allows you be explore the more vulnerable corners of your self in the safety of a song.

Over the next week or so, I will pour over these three EP’s by these artists who are passionately intent on producing honest, vulnerable and beautifully crafted songs and stories.

Part 1: Molly Parden With Me in the Summer EP

I came across Molly Parden when she was playing with Country Singer Sam Outlaw on his recent tour. I fell in love with her soft and emotive voice, and unguarded stage presence so I immediately searched around on iTunes until I found her. Her new EP, ‘With Me in the Summer’ popped up and though you should never judge a book by it’s cover, I fell in love with the EP’s artwork; the blushed pink tone and Molly’s resigned (or was it serene) figure. I then had a listen to the first two tracks and hit pre-order, never once looking back. I was so smitten that I bought her 2011 album ‘Time is Medicine’ purely based on the title (the concept of time and memory always has me hook, line and sinker), and the songs The Gambler (Western Song) and A Song for My Mother.

Parden lives and works in Nashville but grew up in Georgia. On Friday (July, 15) Molly released ‘With Me in the Summer’; four tracks solely written by herself except for the Motown inspired Still Miss the Way co-written with Joseph LeMay. The EP bends towards the Pop spectrum than ‘Time is Medicine’ did but as someone who has listened to both the EP and the album in quick succession, I can see the continuation in sound and lyrics from one to the other and back again.

‘With Me in the Summer’, opens with Seasons of Love, a track completely perfect for driving down long and empty roads, on late summer evenings with the never ending night stretched out in front of you. Steady drums, acoustic and electric guitars and Parden’s soothing vocals create the ambience to get lost in on the road both within the words and music.

Seasons of Love is a matter of fact kind of song. There’s no sweetness, no wanting to get even. Nor is there an urge to crawl under the covers and disappear. The song merely likens love to the movement of time; be that the seasons or a day in the life of any one of us. Nothing stays the same, nor should it be expected to. Love changes and grows, sometimes it becomes familiar like a favourite book;

“I put you, down on the table/ Like a book I’ve already read/ And I remember, why it was my favourite/ I know that I’ll read it again.”

And sometimes, it goes and is merely a memory of someone who has already left but who will always been with you, even as the seasons change;

A softer song with its delicate guitar; one that declares love for a place not a person and the longing we all have to return to home, whether that be a place or just merely a feeling.

“Kentucky, I feel you washing me/ In the stillness of your streams, I can close my eyes and breathe/ As the world around me turns, as my love begins to burn/ I’m healing my heart in Kentucky.”

The song evokes that wide open fields feeling, sitting on a gate with your feet tucked under you and watching the clouds move overhead and horses running with the wind.

“While the horses roam, beneath the sea of stars/ I could watch them every time/ I could ride until I die/ In the magic of the dark, there’s a light without a spark/ And I feel it in my heart in Kentucky.”

The unexpected track on the album not because it feels out of place or even a departure for Parden but because it actually feels so effortless and natural, like she’s coming home to a sound and a style fits her perfectly; it’s melancholy lyrics and gentle and under the skin melody. Reminiscent of those old Motown songs with their signature upbeat and gentle tempos and harmonies but always countered with those desolate and deeply depressing lyrics.

Still Miss the Way is the longing after a relationship has ended even if that relationship that was damaging and destructive. It’s the loss of the familiar, the quietness now that the conversation no longer exists, and the emptiness of your bed during those long nights. It also touches on the myth that only unhappiness breeds good art, and that it was only when she was suffering that she could sing.

The EP ends with Weather, the melancholy sister to opening track Seasons of Love with its harder instrumentation and more static lyrics. If Seasons of Love conjures images of driving down highways in the summer, lighthearted and free then Weather is the opposite, pacing up and down a room, watching your love disappearing under the door.

The song is one of knowing that love has already left but you’re hoping that if you keep still and keeping praying, it will return. A song of ache and desperation; that frantic place where we have all been, of wanting to keep the conversation going with that person when you know they’re about to leave.

“Ooh, you’re with me again/ Rain ribbons washing the floor of my room before 9am/ I can feel you again/ Holding the pieces together, the give and let go in the end.” 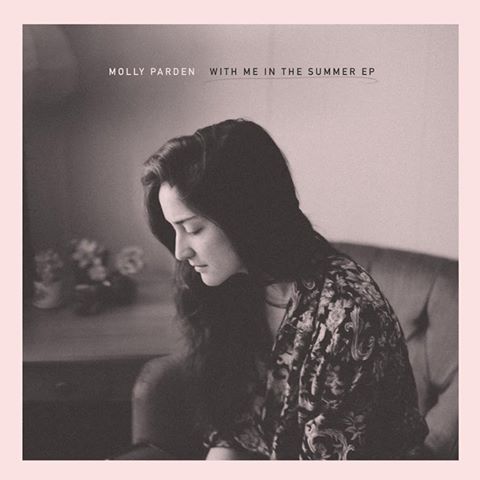 2 thoughts on “The Summer of Eps: Part 1 Molly Parden”